Book: Columbus and Other Cannibals

Continuing the discussion from Roles, redux:

@Jerry asked for this ref: 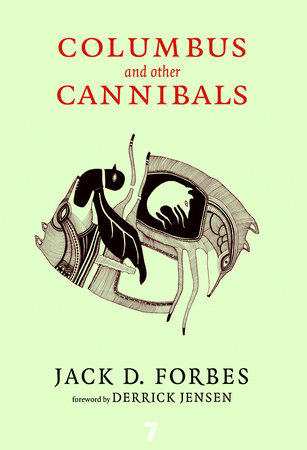 Celebrated American Indian thinker Jack D. Forbes’s Columbus and Other Cannibals was one of the founding texts of the anticivilization movement when it was first published in 1978. His history of...

Hi @Jerry — A few comments by way of review.

Do you and others at OGM need to read this book? Probably not, in all honesty, but if you have time, I do think you’d enjoy it! (The foreword says that it’s possible to read it in one sitting: maybe if you clear a whole day!)

I feel like OGM & peeragogy both have a kind of “neoprimitive” bent to them that fits well within Forbes’s school of philosophy. With that in mind, if you don’t have time to read this whole book but would like a short dose of similar topics, then I suggest to read Mob Software by Richard P. Gabriel instead. There are further references in there about “gift culture” that I also need to follow up on, and many things to unpack here.

For one my current projects, I’m trying to build up an understanding of world philosophy relative to a project about the “ethics of computing”. Forbes only mentions computers obliquely, but nevertheless there’s an interesting broader context of systematized control that they fall within, and he deals with that throughout each chapter. I think he’d likely be open-minded to ways of using computers and other organizational tools to resist the weitko disease (here is a brief recap).

In light of it being Christmas, I’ll mention one smile-inducing part of the book: Forbes contends that Jesus was an Indian. Regarding the anti-civilization tag from the summary quoted above, he gives many examples of how the allegedly civilized Europeans were anything but, when it came to treating others with dignity. I’d see the book as less “anti-civilization” and more “pro-dignity”.

In this regard it could potentially be part of a core OGM library; I wonder what other books people might like to reference & recommend?

Thanks for reminding me of Mob Software! Gabriel is a friend. Great stuff.

Of course, I have started an OGM Bibliography in my Brain. It’s small so far…