Here’s, briefly, my current thinking/rationale (attempt of sensemaking) around it, given that likewise, as with OGM purpose discussion threads, there are multiple proposals/invitations out there for infrastructure + tooling (might require basic research, prototyping, experimentation, iteration):

There’s no hope justified to actually build some system/infrastructure, despite there’s lots of talk about it all the time, but priorities, attention, focus, commitment, investment is somewhere else entirely. Therefore and in general, I don’t think it’s reasonable to imagine/frame such an effort to be very broad/wide or to have the goal of “replacing” the Web or compete with it, not at all. The Web is fine and great and works well for/with the things it does, like online applications (shops, games, etc.). Instead, maybe there’s more merit to identify very specific pains and target these strategically, ideally of low-effort and huge gain/benefit/leverage (“low-hanging fruit”), ideally each done as individual, independent capabilities (each small, doing one job well, quick/cheap to implement), which may cooperate/interoperate later into a larger toolset. Also, with Ted Nelson’s conception of the user being of individual genius and Doug Engelbart’s (or maybe more specifically Sam Hahn’s) notion of the single, individual, high-performance knowledge worker augmented to perform a function/role very well (collaborating within a team or not), that might be the best bet to bootstrap oneself out of the current paradigms.

Could be important to point out that I’m not proposing any more that anybody else should do anything differently or join or contribute, just want to leave with the question of what would be needed for the immense ambition that’s frequently discussed all the time, in order to have a chance to eventually get there. There’s a huge discrepancy, distance, delay between the vision and planning as well as practice to ever get there. Could also well be that it’s a great narrative/imagination, but for various reasons few/nobody want to really arrive at that particular destination and do prefer some other place(s) instead, which is also cool and fine.

the single, individual, high-performance knowledge worker augmented to perform a function/role very well (collaborating within a team or not), that might be the best bet to bootstrap oneself out of the current paradigms.

I respect your opinion and although mine differs from it, I’m not going to debate yours, not in this topic, the explicit purpose of which is forming a community of knowledge gardeners dedicated to cultivating the collective intelligence of the OGM initiative.

Just to clarify, this is a case/framing (maybe not exclusively so) Sam Hahn promoted, could be that it has been Engelbart’s too. I’m mostly worried and confused because I don’t see much collaborative action/solutions for bootstrapping or improvement. Also recognize that there’s many different people with many different skills. Personally don’t care much what the model/conception is or how it’s called, dismissing a bit the who/where in favor of when/what/how, only wonder if it actually works or not, especially given the announced immense ambitions. Don’t mind setting and maintaining high ambitions, but on the other hand scared of fooling/tricking myself in believing that there’s progress towards a goal if there is none or not enough, falling short (as potential, ability, etc. has an expiration date, and be it set naturally). No need to go into it any of these, only wanted to get the record straight.

Very brief and to be more constructive: Knowledge Gardening is perfect, pragmatically let’s just see who grows, offers, contributes, stewards which data, information, knowledge, wisdom, and to whom/where such fruit can or should be delivered, and what should be seeded/planted, is enjoyed/appreciated/requested/healthy/nurturing

Nobody advocating/demanding to have an ugly garden which only grows weeds, gets burnt by the sun, gets scrapped/vandalized by whomever passes by.

In that wonderful image, quickly wanted to make a case that a gardener doesn’t simply plow the ground with her bare hands, and neither working it with Monsanto Roundup and John Deere.

who grows, offers, contributes, stewards which data, information, knowledge, wisdom, and to whom/where such fruit can or should be delivered, and what should be seeded/planted

Stephan, those are so vital questions! Would you be interested to help to co-develop the answers, once the team came together and ready to work with them?

Is a knowledge gardener role part of the list here: Roles, redux (albeit poorly specified, and presently under another name)? If not, let’s add it. In any case, I think it would be great to get clarity on the questions asked just above, and have a reasonably clear examples showing what this role is all about. How is it done here at OGM? Is the skill teachable and learnable?

Is a knowledge gardener role part of the list here: Roles, redux

The StoryWeavers role comes to it, and thank you for modeling being one by posting your question here and linking there.

However, a Knowledge Gardener, as I imagine the role in the present OGM context will be more than that. Will come back with a suggested role description, over the weekend.

if we were to apply Theory U thinking to this phase of our journey, we would be past Presencing somewhere moving towards Crystalizing. Once that phase is completed, and it seems we may be getting there, then we would develop concept ideas and seek to bring them into a prototype phase.

With that said, it may feel risky to submit practical, action focused ideas that may or may not resonate with the group. But there is no better way to find alignment, then just coming out and saying here is an outcome I can envision. Here was my suggestion, obviously that also can be at any scale. 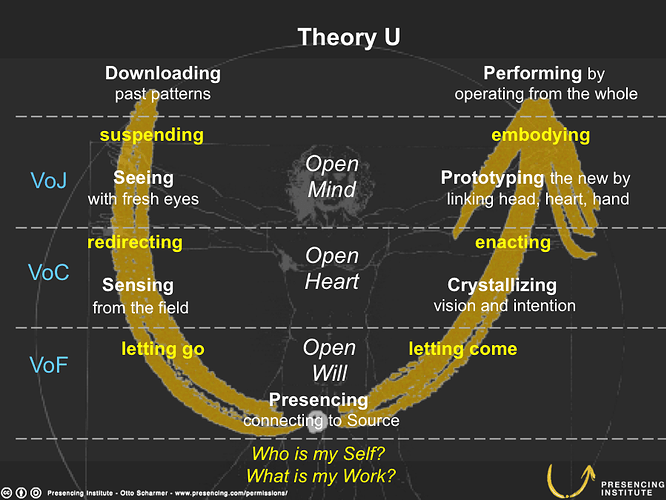 if we were to apply Theory U thinking to this phase of our journey, we would be past Presencing somewhere moving towards Crystalizing.

@Klaus, thank you for reminding us of the U Process. Here’s a more detailed representation of it: 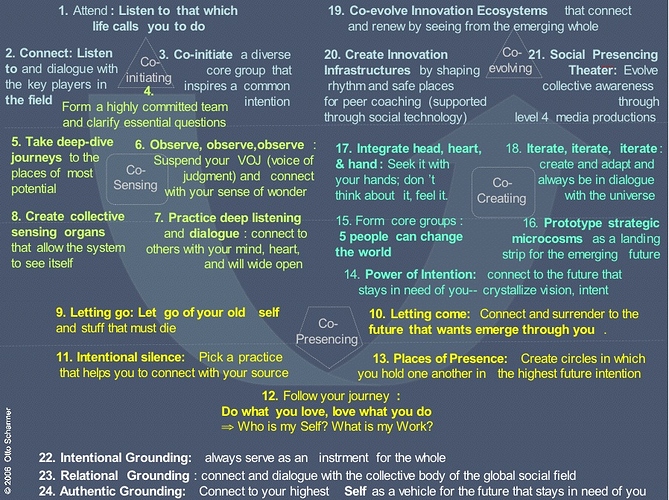 That makes me think that, in terms of Theory U, @Jerry and his associates engaged the Co-initiation phase but we, as a whole, have not yet gone into the deep dives of Co-sensing and the practices of Co-presencing, both of which would be necessary to successfully go up on the right leg of the U.

Stephan, those are so vital questions! Would you be interested to help to co-develop the answers, once the team came together and ready to work with them?

Maybe… wouldn’t a team easily come together as soon as there’s a second person interested, committed enough, joining? And then such a team would develop answers for how they go about knowledge gardening in the course of their activities/practice, simply as a result and because they have to for the data they’re collecting/producing, right?

So per your initial post about curating the posts here on the OGM Discourse, there’s already team(s) which set the whole place up and maintain it as well as team(s) of facilitators/curators who will work on summarizing/organizing the posts. None of that is very transparent/open, fine, would also require even more messages/coordination given the inadequate setup/channels, “too many cooks spoil the broth” antipattern too, so to bootstrap out of it and not get stuck in a chicken&egg problem, better get the reduction going by whatever means necessary, and be it manually or on paper, simply charging ahead and adjusting later, but subsequently I’m not part of these existing teams and involved with what answers they come up, instead would in such a scenario always be much better off in doing my own thing/charge/team, that’s probably what the existing teams figured themselves as well.

The really, REALLY important question however is what the grown/gardened/harvested result will be, of what type/nature. With many teams already going on their own intransparently, they already have to find/decide their own answers in the process, and that’ll define/influence what the results will be, and we don’t need to develop other, new, different, conflicting answers after-the-fact to their results, which are already produced.

For other teams (ideally open ones), may I ask if you have some data, information, knowledge you are gardening already or want to garden, or assist in gardening such for some other third party?

get the reduction going

nice one, “broth“ as a reduction

noticing an interesting blend of metaphors, here at the moment e.g., gardening and cooking/ broth-making.

i suggested recently that @Jerry may be the ogm master gardener with purview to have staff, and ultimately care for the soil, beds etc

also, he may be the “chief inoculator” — with “inoculation” as a likely OGM Role as well as potential Value (my idea)

is it too easy/ simple to say he’s also the master chef in the knowledge kitchen??
hmmm

and what of metaphorical ecosystems?
i’ve traversed this territory previously and it gets so messy mixing metaphors.

do we need to pick one metaphor system and run with it ?!

@lovolution ~ to me, a knowledge ecosystem is not only a metaphor but a post-KM paradigm of collaborative knowledge development and representation.

I agree with you that @Jerry is the ogm master gardener, given his role as the chef instigator. If and when he needs some specific expert advice, he knows where to find me.

If what I proposed here is redundant with what is already happening, I’m glad to step down and leave this topic. I’m totally not looking for more pro bono projects…

If the Knowledge Gardeners were doing a quest, maybe their “harvest” would be one example of a quest!

absolutely. in my view harvesting — aka wrapping — is the primary meta-quest, taking so many forms and modes, and containing within it all practical applications thereof.

additional core meta-quests of the knowledge gardener/ guild/ ecosystem include:

all of the above are essentials in the Interoperability Flow pattern set.

thank you @Technoshaman for pointing out my hasty oversimplification. perhaps wrapping can be an initial surface layer pass in the many layered process.
eager to dive in!!

FWIW, here’s the link to the Wrapper pattern:

I’d like to also call attention to Francis Bacon’s “Pan”:

As for the tale that the discovery of Ceres was reserved for this god, and that while he was hunting, and denied to the rest of the gods though diligently and specially engaged in seeking her; it contains a very true and wise admonition—namely that the discovery of things useful to life and the furniture of life, such as corn, is not to be looked for from the abstract philosophies, as it were the greater gods, no not though they devote their whole powers to that special end—but only from Pan; that is from sagacious experience and the universal knowledge of nature, which will often by a kind of accident, and as it were while engaged in hunting, stumble upon such discoveries. — https://www.bartleby.com/82/6.html

Pan is the son of Hermes, the messenger god, so it seems to me there’s a robust but slightly obscure connection between wrapping and harvesting!

Panic goat-god, son of Hermes; the shepherds of his native Arcadia used to whip his statues on bad years… 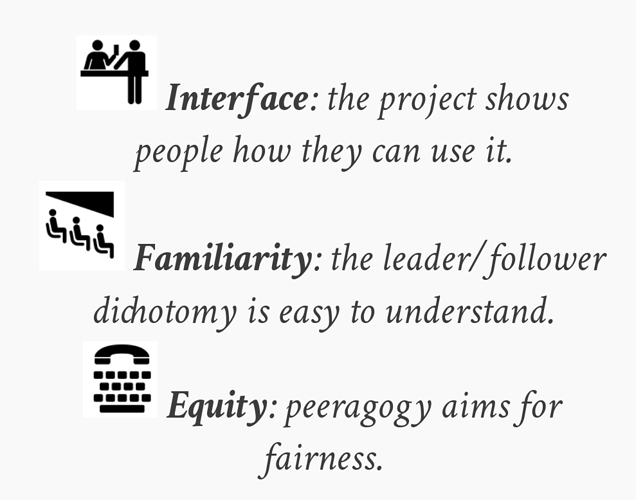 That Wrapper is a nice example of well-crafted pattern!