On a level, I understand what it means. The Borg of Star Trek and the “insects” of Ender’s Game don’t have collective intelligence because they are a “hive-mind” rather than a collection of equals. I know there are numerous examples of aliens that communicate and share all knowledge mentally, but I can’t recall them now.

Still, that doesn’t help me. So, if anyone can help, I’d appreciate it. Be prepared to give me examples.

I’ll start out with my questions and everyone else should feel free to add theirs.

Thanks for helping me to understand!

This Wikipedia article (that quotes me) could be a good place to start.

I would recall the DIKW infographic George shared (which adds Intelligence between the typical Knowledge and Wisdom levels).

Some other DIKW background:

Each level up involves adding more context, organization, and cognition.

“Intelligence” for a human connotes “individual,” but presumably a group of humans could contextualize, organize, and cogitate together, to create “group intelligence” or “collective intelligence.”

Some sense-making questions (rhetorical or not):

Also see William Calvin’s ideas about how brains work, and thoughts and concepts are formed within a human mind. 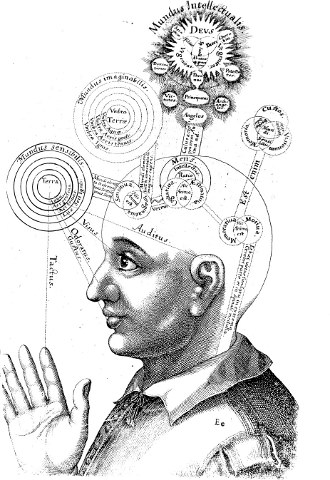 William H. Calvin, "Competing for Consciousness: A Darwinian Mechanism at an Appropriate Level of Explanation." Journal of Consciousness Studies  5(4)389-404 (1

(and his earlier books, “How Brains Think” and “The Cerebral Code”).

Calvin says that thoughts emerge from competing “choirs” of cortical columns, in a Darwinian competition.

Calvin does not say, but I have long supposed, that in a sort of fractally similar (scale-free) way, at a number of scales, groups of humans come to collective thoughts in a similar fashion.

I don’t think that’s the only way Nature could arrange thinking and thought, but I do think we humans do it that way collectively (to the extent we do, I don’t think we’re very good at it) because our individual brains work like that, and it’s fractally similar all the way up from cortical columns to cultures and societies.

@peterkaminski, thank you for the reference to Calvin’s work! I almost forgot about it. And your reflection of the emergence of (collective) thought from a fractally similar pattern of competing “choirs” is very interesting. I want to stick it in my second brain, where it will have a chance to become a member of a chorus, then I’ll listen to the tune that will come out from it.

I plan to publish portions of my second brain as a digital garden b4 the end of the year. Is it OK if I quote you on Calvin?

I plan to publish portions of my second brain as a digital garden b4 the end of the year. Is it OK if I quote you on Calvin?

Thank you for asking, George – and yes, it would make me happy if you did.

Another idea of (very large) collective intelligence, one of my favorite essays:

WIRED SCENARIOS: - It's a Poor Workman Who Blames His Tools

In this essay, [[John Perry Barlow]] talks about technology and “Humanity Itself”.