Discussions and Actions Redesigning Everything
BillSeitz August 4, 2020, 1:12am #1

A couple weeks back @peterkaminski posted jerrys-reteat some twitter threads around modeling QAnon as an ARG, which I then spread to the OGM list.

Adrian Hon was the start of that discussion - he’s created the “Zombie, Run!” fitness ARG and multiple other ARGs, plus wrote an interesting design-fiction book.
http://webseitz.fluxent.com/wiki/HistoryOfThe21stCenturyIn100Objects

I excerpted many threads into one of my pages,
http://webseitz.fluxent.com/wiki/2020-07-11-HonsQanonAsArg
connected it to others, including an old post of Adrian’s about the shortcomings of Serious/Persuasive Games, etc., which also linked to a post of his warning against just layering gamification on top of an unchanged core activity.
http://webseitz.fluxent.com/wiki/2010-03-15-HonGamesCantChangeWorld

That included an old post by Jacob Falkovich (putanumonit), which included a fascinating line:
Imagine if we were trying to design a Community of people devoted to cooperation, based on everything we learned about competitive and cooperative games. How should we approach this? We would build a community dedicated to creating something new, a freshly baked pie. It would have to be a long-term project. It would have an important and purely collective reward at stake, like protecting against a common tragedy (Grand Challenge, Plausible Promise). It would involve a bunch of weirdos. It would be something like transhumanism.
http://webseitz.fluxent.com/wiki/2017-08-29-WinningIsForLosersZeroSumGirardCollege

Then this weekend Adrian wrote a follow-up post which included a similar line:
ARGs teach us that the search for knowledge and truth can be immensely rewarding, not in spite of their deliberately-fractured stories and near-impossible puzzles, but because of them. It’s hard to create these communities. They rely on software and tools that aren’t always free or easy to use. The beauty of ARGs and ARG-like communities isn’t their power to discover truth. It’s how they make the process of discovery so deeply rewarding.
http://webseitz.fluxent.com/wiki/2020-08-02-HonWhatArgsCanTeachUsAboutQanon

Which, combined with some other ideas, leads me to a working theory: if we can create structures that people to work together to build intrinsically interesting/meaningful bits and/or atoms, not only does humanity get that benefit of that creation, but those people get the benefit of being constructively engaged co-creators of civilization/enlightenment.

I have no idea how to do that. 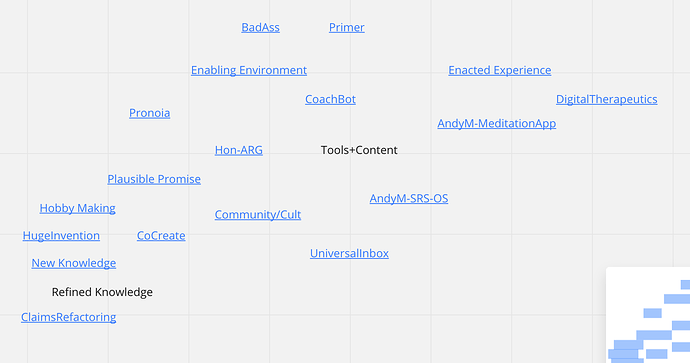